How to Choose the right Bra for Perfect Clothing |

How to Choose the Bra for Perfect Clothing

The right bra can make all the difference in your appearance. Here are some tips on how to choose the right bra for your favorite clothes.

Finding a suitably designed bra in one’s size may seldom prove difficult. In that case, one may consider buying a bra of the right style that has the correct cup volume ( for example, a 38D bra for a 32 F wearer), and then tailoring the bra down to fit.
Different Fabrics
When wearing a shirt with thin fabric, such as a T-shirt, the seams or the other decorations may be observable through the material by creating bumps or impressions in the fabric. To address the issue, the ultimate tool is the T-shirt bra, a type of moulded cup bra so that no seams will be seen through the shirt.
Sheer Fabric:
For sheer clothing, the best color bra to wear is one which relatively matches the wearer’s skin tone.
Different Colours
Light Colours
Albeit the common belief that suggests wearing a white bra under white clothing to hide a bra, the real case is different, as the white bras tend to be more visible under anything. The best bra color for light-colored clothing is skin tone. Individuals with light tones can try pale pink or light grey. Whereas darker people can try muted purples or dark grey.
Dark Colours
A dark-shaded bra tends to be less visible through dark clothing. 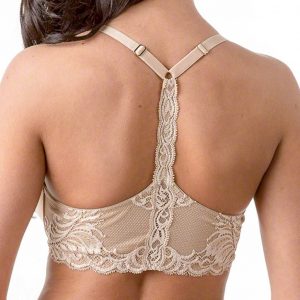 Racer back
Tank tops pose the problem of running inwards, towards the center of the back, exposing the back of the bra’s straps. They obviously do not run low enough to expose the band of the bra.
This bra is useful to have as one can wear it with any racer-back shirt.
Convertible Bra
The straps on the bra can be removed and refastened in different configurations. These are called Convertible Bras. 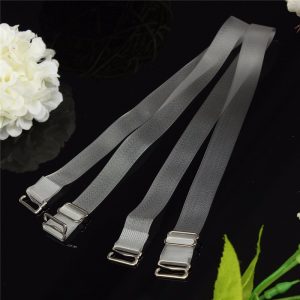 Bra Holder
Bra holders hold the shoulder straps closer together. Due to the kind of materials used, they are less likely to break under breast weight.

Bra Converter Clip
This plastic band holds the shoulder strap together particularly only 1 to 2 inches apart. Depending on the material quality, these may break under breast weight.
Clear Bra Strap
These see-through straps are made of flexible plastic. They are still visible, and light reflection makes them more noticeable.
Backless
A backless bra can be worn when one is wearing a dress with no clothing is covering the back.
Low Back
A low-backed garment differs from a back-less garment in that only a portion of the back is exposed, instead of all the back down to the waist. Bras with a back band can still be worn and remain unseen. One can purchase a low back bra bustier or corset or use a low backed bra converter. The converter attaches to the original bra band fasteners and then pulls around the front of the body such that the bra band falls lower on the back.
Strapless
With a strapless dress, one is best off wearing a strapless bra. However, a corset would also work and clear straps are a noticeable option.
Deep Front
When wearing a shirt with a low-cut front, a plunge bra would be the best choice. If the sides are lower, as well a demi cup bra or a balconette bra specifically would be better options to avoid the sides of the cups from showing.